What is Social Entrepreneurship?

Social entrepreneurships are usually nonprofit or not-for-profit. They can be for profit, too, though. For profit social entrepreneurs must balance making a profit with meeting their goals for social change. Success for these companies includes meeting revenue goals as well as having an impact in communities and lives.

What is social entrepreneurship? One company, Ben and Jerry’s, is answering this question in setting an example for other companies and people to follow. Ben and Jerry’s is a for profit company with a interest in environmental issues, LGBT equality, charity fundraising, and improving the quality of food for all consumers. The company has been in business for nearly forty years, using the ice cream it sells as a platform for meeting social justice goals and having a measurable impact.

Ben & Jerry’s began in 1978, when friends Jerry Greenfield and Ben Cohen decided to go into the ice cream business. They took a correspondence course in ice cream making and bought space in an abandoned gas station in Vermont. They held their first free cone day in 1979, after being in business for one year. This event is still held today.

By 1987, Ben and Jerry’s was operating stores all around the country and was becoming a household name. Their first effort at social entrepreneurship was in 1985. The cofounders established the Ben & Jerry’s foundation.

The goal of the foundation is to provide funds for projects that gave back to communities. Ben and Jerry’s gives the foundation 7.5% of its annual pretax profits. This is just one of the many ways Ben & Jerry’s practices social entrepreneurship and corporate responsibility. Ben & Jerry’s also campaigns against the use of rBGH, or recombinant bovine growth hormone.

In 2000, cofounders Greenfield and Cohen sold Ben and Jerry’s to Unilever. Unilever continues to carry on the original Ben & Jerry’s mission of working for social change while selling a great product. The company advocates for racial justice, democracy, GMO labeling, fair trade and equality for LGBT people.

Another way Ben & Jerry’s follows their values is with the continued Free Cone Day event. Employees give away free ice cream to visitors. They give away over a million cones per year. The company invites local charities to set up their own fundraising events inside the stores. Local celebrities sometimes attend to promote the local charities. Voter registration drives also take place on Free Cone Day, and sometimes the event is held on Earth Day.

According to its website, “Ben & Jerry’s operates on a three-part mission that aims to create links prosperity for everyone that’s connected to our business: suppliers, employees, farmers, franchisees, customers, and neighbors alike.” In everything it does, Ben & Jerry’s answers the question “what is social entrepreneurship?” This company, that began as a small ice cream shop, is now a model for other businesses seeking to get involved and bring about social change. 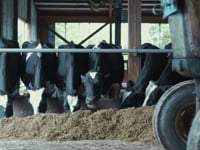 We see shots of ice cream and a woman eating some while the narrator asks what milk is made of before we see a montage of farms that are taking care of the land and by extension their “happy cows.” Ben & Jerry’s works with dairy farmers because that’s the milk we’re made of. Happy cows, happy farmers, happy planet – Ben & Jerry’s 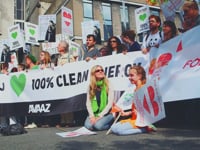 Ben & Jerry’s Join The Climate Movement! – People are marching in New York to call on the United Nations to act on Climate Change. Chris Miller from Ben & Jerry’s talks about how climate change impacts the world and how avaaz is pushing for 100% clean energy by 2050. Ben & Jerry’s encourages you to help fight climate change – if it’s melted it’s ruined. 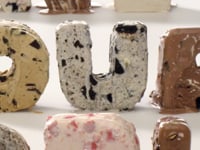 An ice cream is melting into a pile of slush, and the narrator informs us this is what happens when it is only 2 degrees warmer than it should be. For Ben & Jerry’s it’s a mess, for the planet it’s a metaphor. The film then rewinds and the ice cream reforms itself into ice cream shaped into a message that reads “Save our world.” Join the global climate movement. 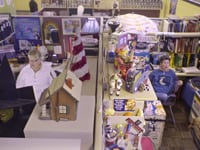 Ben & Jerry’s Marriage Equality – We see Ben & Jerry pint lids hanging from strings while text displays this message “At Ben & Jerry’s we believe loving couples, of all kinds should be free to marry!” A woman tells us about Ben & Jerry’s policy of supporting all of its employees regardless of their gender preferences, even making ice cream flavors spelling out their marriage equality support. To celebrate the supreme court ruling in favor of same sex marriage Ben & Jerry’s has the new “I dough, I dough” flavor. 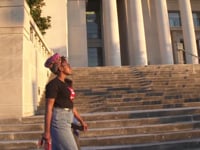 Ben & Jerry’s Love is Love – Two women narrate their love for each other as we see a montage of them spending time together and working out at a boxing gym, supporting each other the whole way.