In a social entrepreneurial company, profit is not the measure of success. These companies are usually nonprofits with a goal of giving back or contributing to society. Social entrepreneurial companies focus on a single issue or set of issues. Carroll’s Kitchen, in Raleigh, North Carolina, focuses on helping women come out of poverty by providing them with valuable job and social skills.

The idea for Carroll’s kitchen began with Jim Freeze. Freeze is an Army veteran who served two tours of duty in Iraq. While working at a church in Raleigh, he encountered homeless people taking shelter on the church floor. Freeze began to wonder what he could do to alleviate the problem of homelessness. He recognized that the root causes of homelessness went beyond people just being poor. He decided to create a place for women to learn skills that would give them a purpose and help them stay out of poverty.

Freeze’s social entrepreneurial vision began taking shape when a local restaurant owner donated one of his empty restaurants for use by Carroll’s kitchen. The restaurant employs eight formerly homeless women. The women work at the restaurant, earning a decent wage while they learn new job skills. The women also have the opportunity to take life skills classes. These classes include money management courses. Some of the women receive affordable housing to aid in their transition out of homelessness.

The program does require the restaurant employees to pay rent for their housing. According to Freeze, “we want to make it as realistic as possible” for the participants.

Freeze named the restaurant after Ernest and Della Carroll. They were a local couple, involved in church and civics, who were also passionate about helping the homeless and other social causes. There are other food service job training programs, but Freeze and his partners wanted to do something for single women leaving poverty behind. Many programs exist for men. There are also programs for homeless women with children. At the time of Carroll’s kitchen opening, there were no programs in Raleigh aimed at single women.

Carroll’s Kitchen is a great example of a social entrepreneurial company that is making a difference in its community. The enterprise works to empower women, address social issues, and provide a delicious service to people in Raleigh. Many women have already received help and turned their lives around through the program. Freeze and his partners plan on growing and expanding in the coming years to help even more women escape poverty and rebuild their lives. 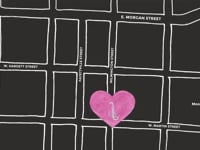 As we’re treated to a montage of pictures the narrator tells us what Carroll’s Kitchen and its mission to support women transitioning from homelessness.